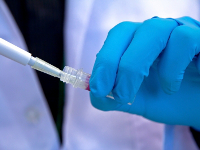 Congratulations to Fatima Qadir and her team at Queen Mary University of London who were awarded the prize for best research poster at the 2017 British Association of Head and Neck Oncologists (BAHNO) scientific conference. Fatima is a PhD student funded by Saving Faces and is now in the final year of her studies. The title of Fatima’s research was “Can genetic profiling aid clinical decision making in head and neck cancer?”.

Fatima’s PhD research aims to develop a non-invasive test that will be used to detect early mouth cancer.