All of us at Saving Faces are deeply saddened to hear of the passing of our Patron Roger Graef OBE.

Roger was a filmmaker, writer, criminologist and theatre director. Along with his company Films of Records, Roger made many award winning films on social issues, current affairs, science and arts. These films promoted change in areas such as youth justice, police handling of rape, urban redevelopment and family problems.

He was awarded a BAFTA Fellowship for lifetime achievement, making him the first documentary maker to do so. In 2006 he was awarded a OBE for services for film-making and broadcasting and in 2013, BAFTA held a tribute evening to celebrate his 50th year as a filmmaker.

Roger was a long-term, generous and dedicated Patron of Saving Faces, regularly attending events such as our Carols at Christmas concerts and will be greatly missed.

You can find out more about the life and work of Roger in this clip from the Radio 4 programme Last Word.

All of us at Saving Faces are incredibly proud that Patron Jonathan Pryce has been awarded a Knighthood for services to Drama and Charity by Her Majesty the Queen.

Jonathan Pryce is known for his performances on stage and screen, recently being nominated for an Oscar for his portrayal of Pope Francis in the Netflix film The Two Popes. He has received many accolades including Olivier and Tony Awards and has recently won the Actor award at BAFTA Cymru.

On screen he has starred in the Pirates of the Caribbean franchise, the James Bond film Tomorrow Never Dies and Game of Thrones as The High Sparrow and on stage has appeared in Macbeth, King Leer and Glengarry Glen Ross. He will portray Prince Philip in the final two series of The Crown. He was appointed Commander of the Order of the British Empire (CBE) in the 2009 Birthday Honours.

In response to his Knighthood he stated “After almost 50 years as an actor I am proud to think that the work and ideals that I have shared with my friends and colleagues is being honoured in this way.”

“All these people live on in our memories”

Our Chief Executive, Professor Iain Hutchison, featured in episode 4 of the podcast ‘Prix Pictet: A Lens on Sustainability’ entitled Mortality.

The Prix Pictet was founded by the Pictet Group in 2008. Today the award is recognised as the world’s leading prize for photograph.

This episode of the podcast explores how photography helps us process our own mortality and remember those who are gone.

You can listen to the podcast here.

An e-book also accompanied the episode which features paintings by Mark Gilbert from the Saving Faces Art Project which can be viewed below.

Many congratulations to our Patron Jonathan Pryce for winning the Actor award at BAFTA Cymru for his role as Cardinal Jorge Mario Bergoglio / Pope Francis in The Two Popes!

The Two Popes is available to watch on Netflix and you can view the full trailer here. 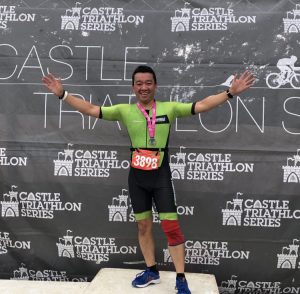 ​In both events, Mr Chiu found the run the most difficult part. ​He had to swim in waters as low as 12 degrees at Hever Castle, which resulted in the swim being cut short from 1.5km to 800m.

Even though ​the events were both challenging he enjoyed his time in two beautiful countryside’s.

​We are incredibly grateful to Mr Chiu ​for taking on these challenges and to his supporters for giving generously. The total amount raised ​so far is over £500.

If you would like to help Saving Faces with raising essential funds, please visit our fundraising page. 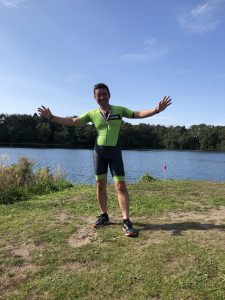 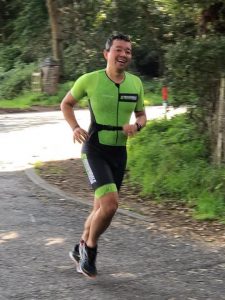 Geoff Chiu will be completing the Hever Castle Triathlon on the 27th September for Saving Faces. The Triathlon consists of a 1.5km swim, a 45km cycle and a 10km run.

Geoff is a Consultant in Oral and Maxillofacial Surgery at East Lancashire Hospitals Trust and Royal Bolton Hospital and looks after the faces and jaws of people in East Lancashire and Bolton.

Geoff has chosen to raise money for Saving Faces because of our research into enhancing patient care and recovery for patients who have had surgery to their face and mouth.

You can sponsor Geoff here.

A huge thank you to our supporters who ran the Royal Parks Half Marathon on 13th October 2019 to support Saving Faces! 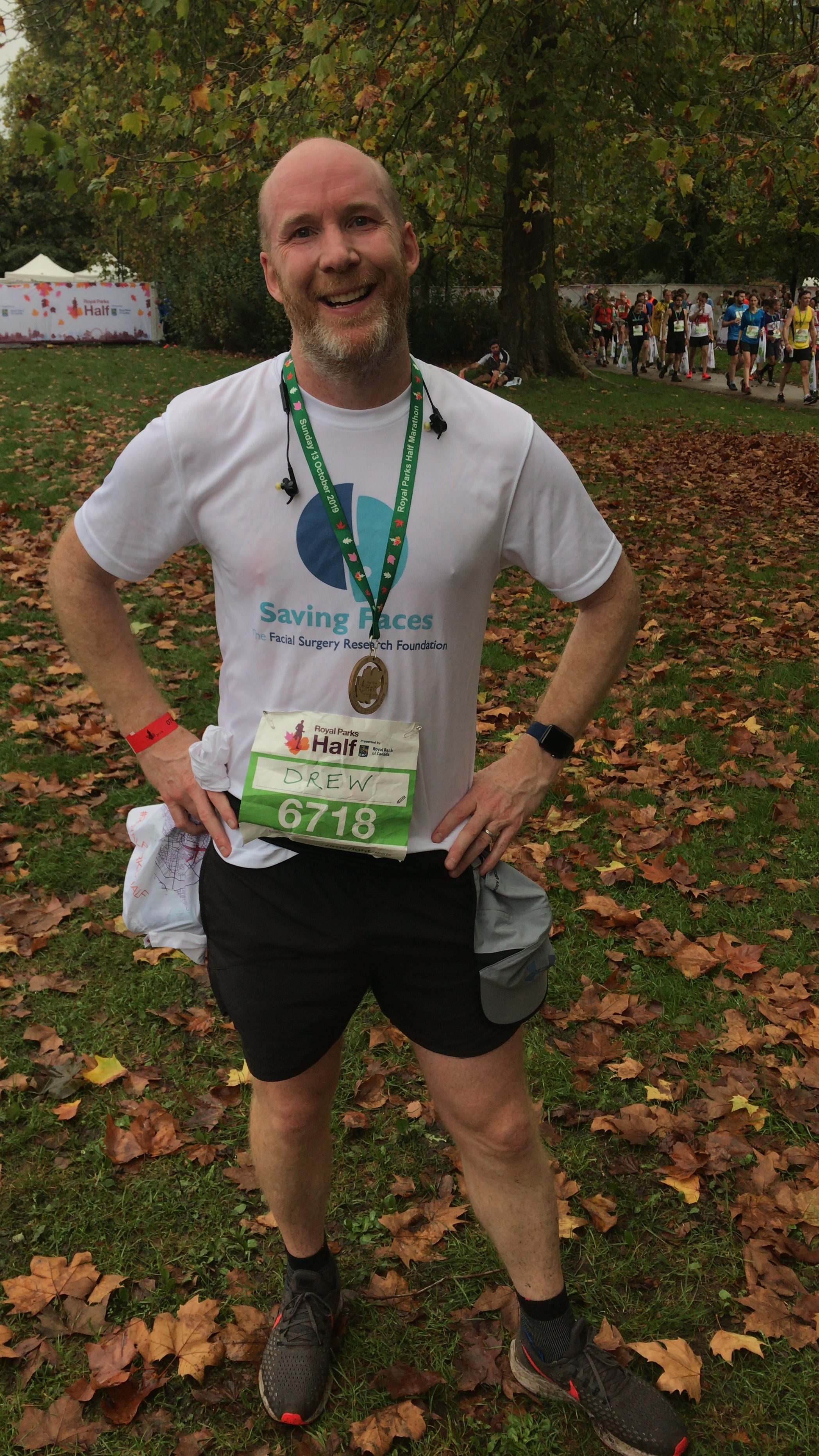 Drew completed the half marathon in the incredible time of 1 hour and 40 minutes! 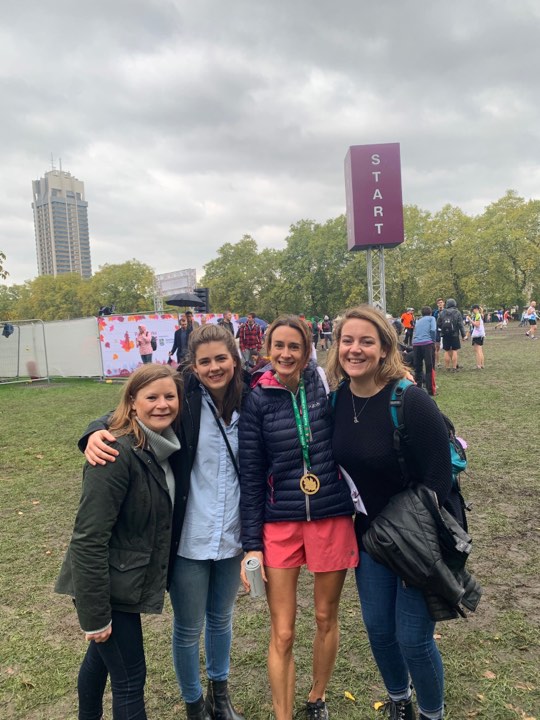 The Royal Parks Half Marathon was Maxine’s first half marathon.

She completed it in the amazing time of 1 hour 50 minutes!

Thank you to all our runners who took part and raised the wonderful amount of nearly £2000 for Saving Faces!

The Vitality Big Half

Kat Huggins is running the Edinburgh Marathon for Saving Faces!

A huge thank you to Frank and all his supporters for this fantastic fundraising effort to commemorate the 75th Anniversary of D-Day. The total amount raised was over £1,700!

The first drop took place near Caen in Normandy on 5th June 2019, which marked the 75th anniversary of D-Day. Frank and the pilots were featured on the BBC’s The One Show. 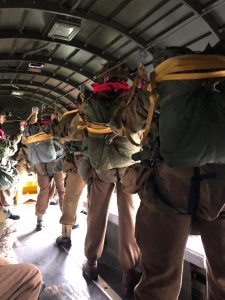 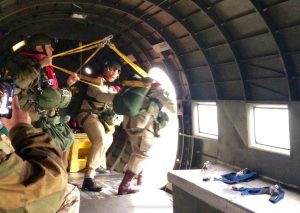 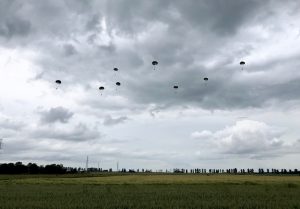 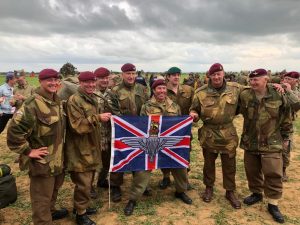 The second drop took place near Arnhem in the Netherlands, The Battle of Arnhem was a significant battle amongst Airborne Forces and the film ‘A Bridge too Far’ portrays the events. 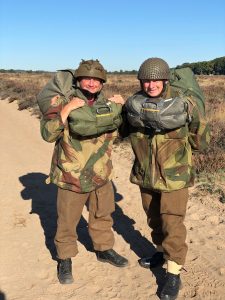 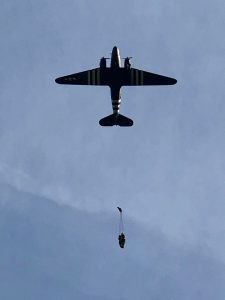 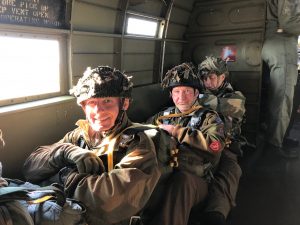 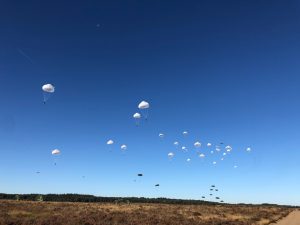 Thumbs up for D-Day parachute fundraising jumps by Frank Fletcher

In August 2019, the family of Jaia, who was operated on by Professor Hutchison in 2013 to remove a haemangioma on the bridge of her nose, held a fundraising bake sale for Saving Faces. A selection of delicious food was served including cakes and samosas.

END_OF_DOCUMENT_TOKEN_TO_BE_REPLACED

You can now raise funds for Saving Faces entirely for free while you do your everyday shopping online.