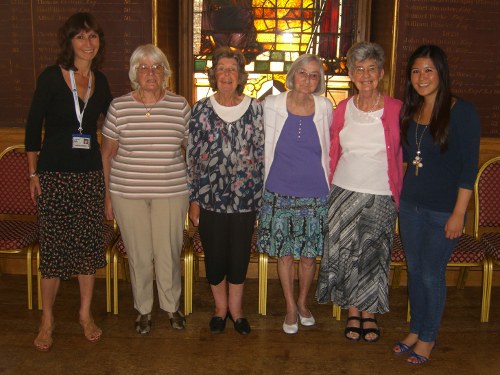 Our Support Group really came about by accident!  I had a 14 hour operation to remove cancer from the bottom jaw of my mouth which involved taking away my bottom teeth, underneath of my tongue, jaw bone and lymph glands followed by 6 weeks of radiotherapy.

I met Maureen S. while we were both waiting to see our surgeon at Kingston on Thames Hospital.  We both recognised the condition of our arms from which skin, bone and artery had been taken for rebuilding our mouths!  We have encouraged each other ever since and that was nearly 8 years ago.

It was being suggested that I should write a book about my experience and after much hesitation, I took on the challenge. Unfortunately, none of the main-line publishers could see a sufficient profit for themselves in the story line but recognised that it was very well written, so I decided to self-publish   “Thank You With a Smile” and give all the profits to the medical charity- Saving Faces.

A lady living near me called Veronica J. having also suffered mouth cancer, saw my book advertised and phoned me for a copy.  Having read it she ordered 2 more and we kept in contact and shared our experiences.

Sometime later a neighbour of mine told me about a work colleague who had just been diagnosed with mouth cancer.  So I went to see Carole A. before her operation, and then kept in regular touch with her during her recovery period.

By this time it seemed that it would be a good idea to try and get the four of us to meet together.  Trying to sort out a convenient date for everybody was not easy because of the many hospital appointments we all had!  At last we made it and what a good time we had!  There was so much to share, finding mutual understanding in what we had all had to suffer.  Maureen & Sandra suggested that our Group should be called “Bits and Pieces” which we felt described us perfectly following all that we had gone through and, in some cases, were still experiencing.

I had told our consultant about the creation of our Support Group in case he knew of other patients who might benefit from joining such us.  It was then that he told me about Sandra T.  I immediately got in touch with her and she was delighted to find that she was not alone and that there were others who had and were suffering as a result of mouth cancer and their subsequent treatment.  She was very happy to join us but quite nervous.  She soon found that she was among friends and, bit by bit, she relaxed and now looks forward to each meeting.

We all live within 10 miles of each other and are able to visit each other quite easily.  We share e-mails and phone numbers to keep in touch to share and compare our needs as they arise.  We try to meet once a month with husbands (where applicable), where they too can share their experiences as carers. At one of our recent meetings, we invited a representative from a “Communication Aids” supplier to speak to us as we never know when we might be in need of such an aid as speech for some of us is not easy.

In August this year we were invited to the offices of “Saving Faces” at St Bartholomew’s Hospital in London.  Veronica, sadly, was not well enough to come with us, but the rest of us enjoyed a very happy day out, and were looked after by the staff who had planned our day.  We met them at about 11am and spent quite a while chatting about our Group and hearing about the work of Saving Faces and future ideas.  Then we were taken and shown the hospital’s famous “Grand Hall” which was so interesting, followed by a tour of the Hospital Church which is steeped in history.  We were then permitted to eat our strange, pre-prepared, packed lunches in the cloisters coffee shop as we all have problems with eating. However their soups and coffee went down very well. We all enjoyed just relaxing together in mutual understanding of what it was like to have suffered so much and were continuing to do so.  On returning home my husband, Alan took our car load of “Bits & Pieces” past several of the well known sites in London, which made a lovely end to the day and was much appreciated.

It was also lovely for Alan and I to be able to welcome all the members of the Group to our Golden Wedding Celebration which meant a great deal to us both.

There are many support groups for various health problems but not for mouth cancer.  To suffer mouth cancer often means difficulty in eating (or not to be able to eat at all, therefore, having to be fed by tube), speaking, pain and/or deformity which in turn makes socialising very difficult.  Therefore, to be able to share problems and difficulties can be enlightening, helpful and encouraging.