On May 12th, Saving Faces’ own, Iain Hutchison squared off against the formidable Maggi Hambling, as part of a series of events surrounding her latest exhibition, Maggi Hambling: War Requiem & Aftermath.

Maggi Hambling is one of Britain’s most distinguished contemporary artists, consistently irreverent and controversial. In 1980, she became the first Artist in Residence at the National Gallery, London. Hambling has exhibited extensively; major solo exhibitions include the National Portrait Gallery; Serpentine Gallery; Yorkshire Sculpture Park; State Hermitage Museum, St. Petersburg; Yale Center for British Art, Connecticut; and, most recently, her return to the National Gallery, London in 2014 for her exhibition Maggi Hambling: Walls of Water. Her public works include ‘Scallop‘ a celebration of composer Benjamin Britten and installed on Aldeburgh beach in Suffolk, ‘A Conversation with Oscar Wilde‘ near Trafalgar Square in London and ‘The Winchester Tapestries‘ of Winchester Cathedral.

The exhibition is on display at the Inigo Rooms, Somerset House until the 31st of May. It brings together retrospective pieces on the subject of war, as well as a new series of sculptures. For Aftermath, Maggi collected driftwood, building up the pieces with plaster before casting in bronze and painting. The final effect is a menagerie of semi- human and animal forms, fossilised. War and time levelling man and beast. From our biased perspective it couldn’t help but evoke twisted skulls and broken anatomy.

The event kicked off with a verbal and physical tug of war, with both speakers fighting over the microphone and ribbing each other good-naturedly. The audience knew they were in for an entertaining evening.

Although they had known each other for many years, Iain first came in contact with Maggi’s work on an impromptu trip to her studio. He had always been interested in the cross-over between art and medicine, as evidenced by the Saving Faces art project, but artist Mark Gilbert and the work of Henry Tonks (which inspired the project) had tried to create acurate representations of the patients and their conditions. in Hambling’s work, Iain first saw the “rage and emotion” that could be captured in an abstract form. He snapped a picture of the painting which brought about this realisation and it has travelled with him since.

Anecdotes flew thick and fast. Some of the highlights included, Oscar Wilde trying to keep hold of his cigarette (it’s been stolen three times!), the risks associated with painting nobel prize-winning scientist Dorothy Hodgkin (insulin is a complicated molecule to paint) and being recognised as a famous artist by Frank the BT helpline operator. 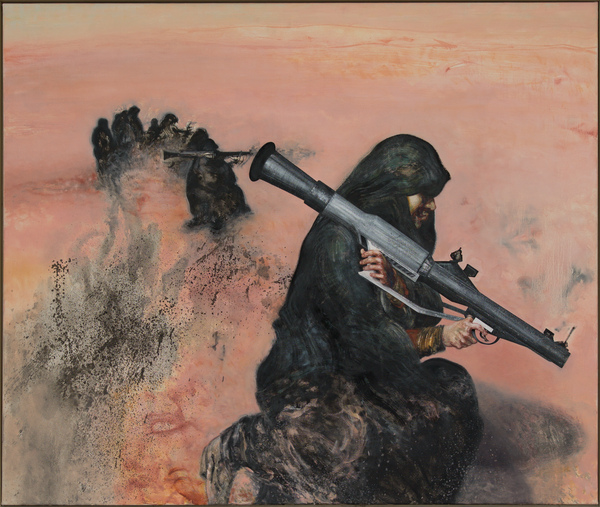 Given the subject was war and it’s aftermath, the conversation did not shy away from harder topics. Maggi spoke warmly of her friend George Melly, who she continued painting after his death. “Art is a positive way of grieving,” she said.

On the topic of war, Iain highlighted one of the most striking pieces of the exhibition, Gulf women prepare for war (pictured). Maggi’s inspiration came from a striking image in the newspaper that stayed with her. She firmly believes that it is the subject that chooses the artist.

Though there seemed to be plenty left to say, the evening had to end some-time. “Are you requited?”, Professor Hutchison asked, with customary brazenness. The response; a rolling of the eyes, “I’m perfectly requited, thank you.”

The conversation was recorded by the event organisers, King’s College Cultural Institute. We will share the link when it becomes available.

And finally, many thanks to Jean-Pierre and Beryl Touchard, who allowed us to hijack their camera for the photographs above.

This website uses cookies to improve your experience while you navigate through the website. Out of these, the cookies that are categorized as necessary are stored on your browser as they are essential for the working of basic functionalities of the website. We also use third-party cookies that help us analyze and understand how you use this website. These cookies will be stored in your browser only with your consent. You also have the option to opt-out of these cookies. But opting out of some of these cookies may affect your browsing experience.
Necessary Always Enabled

Any cookies that may not be particularly necessary for the website to function and is used specifically to collect user personal data via analytics, ads, other embedded contents are termed as non-necessary cookies. It is mandatory to procure user consent prior to running these cookies on your website.