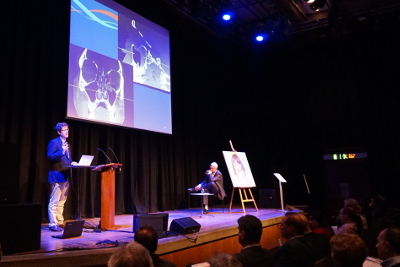 Surgeons and researchers from around the country and beyond gathered on Wednesday, 26th of November for the offical launch of the National Facial, Oral and Oculoplastic Research Centre (NFORC) in the Purcell room on London’s Southbank.

Parveen Kumar, Professor of Medicine and Education, Barts & the London, School of Medicine & Dentistry, began the lectures programme. Using historical figures, she highlighted the importance of research in pushing clinical practise forward. Prof Kumar is the co-author of the influential textbook “Kumar and Clark’s Clinical Medicine“.

Pioneering surgeon, Bernard Devauchelle and his associate Sylvie Testelin, told the story of the world’s first partial face transplant, which they performed in 2005.

Mike Fardy, consultant surgeon and President elect of the British Association of Head and Neck Oncologists (BAHNO), stated that rather than focusing on surgeons’ achievements we should focus on the complications they are facing and the questions they need to answer without having scientific evidence. Complications and uncertainties are many and collecting a lot of data from patients is the way forward in order to improve patient care and treatment. His view perfectly reflects NFORC’s aims and vision.

But for many attendees the highlights of the day were talks by the patients themselves. Their stories brought genuine emotion to the event and gave substance to the science.

The mother of Anna, a toddler with a benign blood vessel tumour (haemangioma), spoke of her anxiety as her child’s birthmark grew to the size of a golf ball. Being a doctor herself, she was shocked to realise how little research on effective treatments was available. As a parent, it was traumatic not to know what was best for her child and to pick surgical removal simply based on instinct!

George B, spoke eloquently about his horrific cycling accident and its aftermath. George underwent ten operations over three years to completely rebuild his jaw and teeth. “I am still no George Clooney” he said, “but at least I have a face.”

Meanwhile, in the foyer, guests were both entertained and informed with live demonstrations, music, and a selection of paintings from the Saving Faces Art Exhibition.

You can watch videos from the event here.