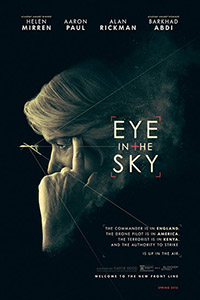 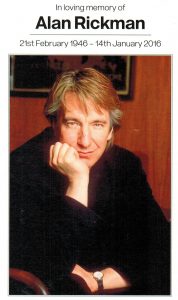 On Tuesday 12th April, Saving Faces rolled out the red carpet for a preview screening of “Eye in the Sky”, Alan Rickman’s last film before he died.

Tuesday’s preview was a very special, even unique event as Oscar-winner Gavin Hood, the director of “Eye in the Sky”, carved time out of his hectic schedule to treat us to an 18 minute quasi-TED talk before the film started. He paid special tribute to Alan, whom he described as “a great humanitarian, very kind, warm and funny”. Though the film deals with serious issues, he said that Alan’s inimitable ability to “bend a line or a look” brought humour to scenes of great tension and genuine empathy to the character of General Benson.

Alan Rickman was a long-standing patron of Saving Faces. In fact, only 18 months ago Alan launched the world’s first and only National Centre devoted to researching better ways of treating people with facial injuries, cancer and deformity; The National Facial, Oral and Oculoplastic Research Centre – NFORC. NFORC is totally funded by Saving Faces.

This film preview was our first step in raising funds to endow a permanent Alan Rickman Professorship to lead this National Research Centre. In this way Alan’s name will live on forever when it is mentioned in all our scientific papers and at medical conferences around the world. His name and photograph will also reach public attention when NFORC’s ground-breaking research findings are presented to the public at our annual free conference and in the media.

Unfortunately we need to raise a £5 million endowment to make this a permanent fixture into the next century. This is a huge undertaking and Saving Faces is calling on all Alan Rickman fans to help make it a reality. To start with, we would greatly appreciate your ideas to develop our fundraising strategy or any advice on crowd-funding, which is new and unfamiliar territory for our charity. If you would like to get involved in this campaign, please contact us.

Getting back to Gavin Hood’s talk, to say it was fantastic would be an understatement. You can see what we mean as Gavin kindly allowed us to share the video online. Gavin was an engaging and enthusiastic speaker, who educated us about the real-world military, political, technological and terrorist background to the film. There were so many facts covered in his talk ranging from PTSD amongst drone “pilots” to the actors themselves. Armed with his insights we were able to gain even more from the film.

The international cast of “Eye in the Sky” was outstanding. As well as Alan there were excellent performances from Oscar-winner Helen Mirren, BAFTA winner Barkhad Abdi (“Captain Phillips”), Aaron Paul (“Breaking Bad”) and a great combination of well-known UK character actors including Jeremy Northam, Iain Glen, Richard McCabe and Monica Dolan. Everybody loved the film and the cast maintained the tension right to the very end of this morally complex thriller.

As the film finished, the words, “In Loving Memory of Alan Rickman” appeared on the screen. This produced spontaneous loud and lengthy applause for the film and its final dedication. In the foyer afterwards we saw several audience members with tears in their eyes, presumably as they realised this would be the last time they would see this much loved actor.

All of us at Saving Faces would like to extend an absolutely massive thank you to The Phoenix Cinema, eOne Films and Director Gavin Hood for making this an amazing evening. It was wonderful to see the theatre packed with people there to pay tribute to our beloved patron Alan Rickman. We will strive to continue to honour his memory.