In 2004 Chris Lewis-Smith had cycling accident which required him to have extensive facial reconstructive surgery. “I hadn’t had time to put my hands out to break my fall,” Chris explained. “Instead I broke my jaw, smashed the bridge of nose, fractured my left eye socket, lost all my front top teeth and a lower front tooth.” Not one to stay down, he thought the best way to raise funds for Saving Faces was on his bike. He signed up for London to Paris in 2010, but he didn’t stop there! 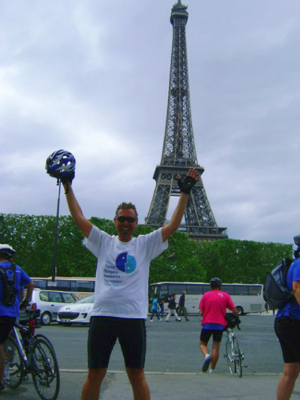 “Training was difficult over the winter,” writes Chris. “Icy roads and two wheels are not a good mix so I set up my bike in the back bedroom on a turbo trainer. When the weather improved I was out on the roads. My forty mile round trip to work was a good start and I rode in as many times as I could. I entered a local ride of seventy-five miles and carried on riding my bike as often as I could.”

“The Paris ride started at Crystal Palace and as I looked down at my front wheel I thought of the three hundred miles I was going to cycle. With a first turn of the pedals I was off. Day one down to Dover was hard and by the time we reached the overnight stop just outside Calais I had ridden a hundred and four miles. Day two to Abbeville was a struggle at first. I suffered the first twenty-five miles. I was low. I made it to the first water-stop, ate and drank and after a short rest I was away. As the ride continued on the way to Paris I gained strength and was pleased with my riding. Next stop was Beauvais and then the following day into Paris. Riding in Paris was a new experience, it was manic, traffic and pavements overflowing with people. While the Eiffel Tower was a welcome sight, it was also a bit sad as the ride was over. The challenge done and all the planning and training had paid off.”

In July 2013, Chris took to the roads again. With his son, Tommy and two friends they cycled 315 miles through the American desert.

“The off road trails were closed due to forest fires so we cycled on dirt roads, back roads and in some instances on the hard shoulder of the Interstate, which is legal in New Mexico. We met some fantastic people along the way. A couple of scary moments with traffic and Pit Bull farm dogs chasing us. It was a real adventure.”

After his American adventure, Chris’ story was featured in Cycling Weekly. “…the funny thing is that I’ve read Cycling Weekly for years, and the one time I get in its pages is all because I fell off my bike!” Read the full interview here.

In 2014 Chris completed the first stage of the Tour de France. The route, which took in the spectacular Yorkshire countryside, finished at the site the Grand Depart, just in time for the start of the professional race.

“It was a great experience. I live in a mostly flat area and the hills and climbs of Yorkshire were a challenge! Butter Tubs Pass was looming in my mind. It was a long slog to the top. It was just a case of keep turning the pedals and looking at the road in front until I reached the summit. When we reached it the weather closed in with strong winds and rain on the top, even mountain rescue were on duty. The next big climb was Grinton Moor and by the time I got there my legs were tired. Another grind to the top and then a nice long whiz down the other side. Yorkshire was like one huge campsite with people pitching tents, camper-vans and caravans ready to get their spot to watch the Tour come through the next day. Watching the Grand Depart in Leeds was a great way to finish the weekend. I have memories to last a lifetime.”