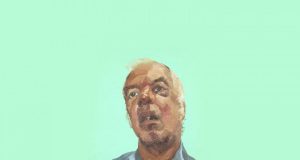 Portraiture is an elusive art, wherein artists seek to convey not only a recognisable physical likeness to the subject but also to delve beneath the surface and capture something of his or her personality.

Being asked to sit for a portrait can be interpreted as a gesture of flattery, but how much more challenging is the process – to both artist and subject – when the face under scrutiny is one that has been ravaged not so much by the natural march of time than by serious illness, trauma, injury or birth defect?

An exhibition at the Naughton Gallery at Queen’s University in Belfast contains 18 portraits of individuals before, after and, in some cases, during surgery for facial deformity, injury or cancer.

The artist is BP National Portrait award winner Mark Gilbert, who produced the 18 works during a three-year period as artist-in-residence in the Department of Oral and Maxillofacial Surgery at St Bartholomew’s and the Royal London, Hospital.

The paintings are currently on loan from the Saving Faces Art Project, which comprises over 100 intimate, intensely moving portraits of some 30 patients and has toured galleries across the UK, Europe and the United States.

These uncompromising, intensely moving paintings have been brought to Belfast by Peter Ramsay-Baggs, a consultant oral and maxillofacial surgeon at the Ulster Hospital, who, for the past year, has been president of the Northern Ireland branch of the British Dental Association.

‘I’m interested in art and I saw this as a way of bringing art into science and showing how portraiture can achieve what photography can’t,’ Ramsay-Baggs explains of his determination to have Gilbert’s work shown in Belfast.

‘Photography tells you about the condition but not about the individual person. There has been nothing like this project since the marvellous paintings done by the official First World War artist, Henry Tonks, in collaboration with the surgeon Harold Gillies. I’m very grateful that I’ve been entrusted to bring them here.’

The Saving Faces Art Project was conceived and founded in 1998 and is based at the historic St Bartholomew’s Hospital in London’s West Smithfield. It is the brainchild of the distinguished consultant maxillofacial surgeon, Iain Hutchison, a contemporary and friend of Ramsay-Baggs.

The project is a tribute to Hutchison’s late mother, Dr Martha Redlich, who, as well as being a dedicated GP in a socially deprived area of Birmingham, was also a talented water colourist.

His vision was inspired by Tonks’s paintings of Gillies’s soldier-patients during the carnage of the Great War. Its purpose is to convey to the public the possibilities of modern day facial surgery, whilst at the same time communicating the strength of spirit which can enable people with facial disfigurements and trauma to lead full and happy lives.

‘The face is the only part of our body we cannot hide,’ says Hutchison. ‘It conveys our emotions and innermost feelings. We often judge each other on the basis of facial appearance, making assumptions on a whole range of issues.

‘Despite the severity of these issues, this remains a much neglected research area, leaving thousands of those unfortunate enough to be affected with little hope for the future. Not enough is known about facial disease, injury and deformity, their psychological and emotional impact and, critically, which treatments are most effective.

‘Saving Faces is the only charity in the UK solely dedicated to the worldwide reduction of facial injuries and diseases. We are taking the lead in education and research to improve the physical and psychological treatment of victims.’

Once the idea was fully formed, Hutchison began the long process of finding the right artist to produce the portraits. As is so often the case, chance played a vital hand in the final choice – on a train journey from Glasgow, Hutchison got chatting to Gilbert and asked him to call him when he got to London. The rest is history and an enduring collaboration as ground-breaking, perhaps, as that between Tonks and Gillies was formed.

Walking around the exhibition with Ramsay-Baggs is an education on a number of levels. This is not merely an exercise in viewing and responding to art per se. Some of the most intense and vivid paintings are intimate close-ups of the surgical process.

Even the most squeamish among us will soon discard his or her queasiness, as it is impossible not to engage creatively with the highly coloured, intricate shapes and constructions of the human body.

One series shows in unrelenting detail the courageous journey taken by Henry de Lotbiniere, a successful London barrister, who lost an eye and underwent 15 operations over 13 years as surgeons chased the spread of cancer of the salivary gland.

‘Here’s Henry shortly after his first appointment with Iain,’ explains Ramsey-Baggs, indicating a tousle-haired man in a checked shirt.  ‘He’s a handsome man but already you can see the effects of the tumour. His was a particularly malevolent growth. By the time you know you’ve got it, it’s everywhere.

‘The paintings of his surgery really capture the process and make a big impact. You can see here his eye, his mouth, the way in which the skin of his cheek has been peeled back and the full extent of the tumour. This second one shows what his face looked like after the tumour had been removed and before the flap has been closed across.

‘He was a really courageous person, who continued to work for 12 or 13 years after his diagnosis. He actually died of pneumonia. There was only going to be one eventual outcome, but the surgery gave him the opportunity to live and do things and, most importantly, build a relationship with his wife and children.’

Ramsay-Baggs agrees that the psychological effects on a sitter, more used to hiding rather than exposing his or her face, are profound: ‘A deep relationship of trust develops between the artist and the subject. Yes, initially, it is extremely daunting for these people to sit and have another person study and scrutinise their damaged faces in such detail. But they have all described the process as therapeutic.

‘Mark talks about the way in which his sitters have asked him questions that they were inhibited about asking the surgeon: “What happened in the operating theatre? What did they do to me?” He was right there so he knows and is not afraid to tell them. The artistic process has provided a cathartic experience for the patients. They feel they can confide in Mark about their traumatic experiences and the recovery process.’

Two pictures show a little girl named Rebecca, whose mother spotted a tiny red dot between her nose and her eye when she was just a week old. By the age of two, it had developed into a crimson growth the size of a large egg. The sad looking child of the first picture sits side by side with that of a smiling girl, who is now reportedly proud of the long, thin scar down the centre of her pretty face.

Ramsay-Baggs says that the painting he finds the most moving in the exhibition is a large image of a father and son. Nigerian mental health worker Henry E developed a bone tumour in his cheek, which grew so dramatically that it blew his eye out. The surgery he underwent enabled him to bring up his young son Jerry, whom he asked to be included in his portrait.

‘He was so proud of his family,’ says Ramsay-Baggs.  ‘The surgery helped him to carry on living long enough to raise his son and build a lasting relationship with him.’

The uplifting stories keep coming and coming… of Dudley C, a former bank manager who blew his face apart with a shotgun in a botched suicide attempt; of little Mazeda, whose tiny face was terribly disfigured by a malignant tumour in her cheek and who asked to be painted in her favourite green dress; of Hakeem S, a Nigerian society photographer who was treated for a malignant sarcoma, which caused growths to spring up all over his head…

This exhibition is an eloquent evocation of the blurred line that exists between art and science, wherein the patient becomes the art work. An unbreakable creative affinity has been forged between artist and surgeon, brush and scalpel.