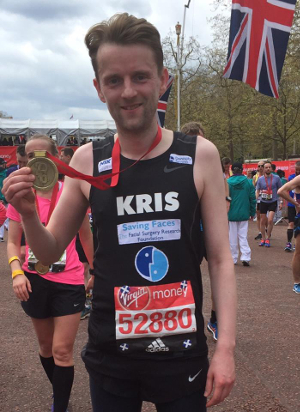 A huge and hearty congratulations to our three runners, Kris Carroll, Stephanie Corns and Alex Lee who took part in the 36th London Marathon yesterday.

Nearly 38,000 participants took to the streets of London to test themselves and raise money in the largest single annual fundraising event in the world. An estimated 700,000 spectators came out to cheer them on. The atmosphere was electric!

Kris, a surgical trainee at Barts and the London hospitals finished in a remarkable 3 hours and 23 minutes. Steph must have been a blur passing by, as even with all eyes peeled we couldn’t see her. She crossed the finish line in a very respectable 4 hours and 5 minutes. Alex was hot on her heels, finishing less than 3 minutes later. We hope all three are recovering and pampering themselves after completing an extraordinary challenge.  Between them, they have raised a fantastic £4,312.82, with more donations coming in.

This was a special year in the history of the event, as the one millionth runner was due to cross the finish line. The name of the millionth finisher will be announced on the 9th of May once all the results have been calculated and checked. It may even have been one of our trio so keep your fingers crossed.

Click the images below to browse the gallery. We’ll be adding more photos as they come in.

There’s still plenty of time to donate and support our runners after a momentous acheivement.

If you’re a medical or dental student, a surgical trainee, registrar or a fully-fledged consultant, Kris Carroll’s MaxFacs prize draw is still to take place. Donate online, making sure to state which department or institution you’re from in the comments. Check out some of the prizes below.