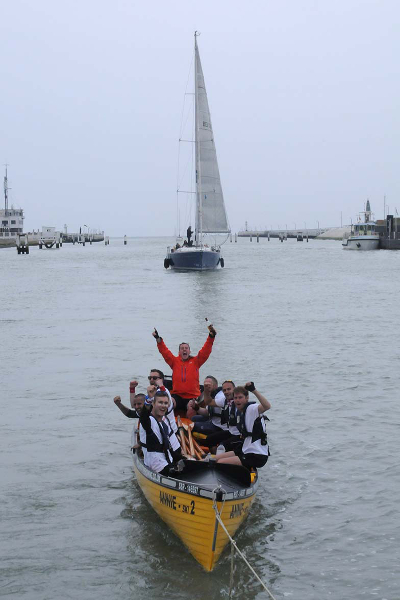 It’s been an epic journey for the Waves4Hope team. It ended on Saturday (20th of June) in spectacular fashion with a 15-hour crossing of the English Channel, waying anchor from Ramsgate on the Kentish coast at 4am and landing in Nieuwport, Holland at 8.40pm.

The seeds of this incredible challenge were sown in 2013 when a group of friends had a deep discussion (we assume there was a pub involved) about what they might be remembered for when they were gone. This idea stayed with them until an unexpected Christmas present fuelled their imaginations. This was a book detailing the journey of six British ex-servicemen across the Atlantic in a gig-boat. The English Channel was proposed as a slightly more manageable target. At this time, team captain Nick Stocker’s mother was sadly diagnosed with secondary cancer. “For me,” he says in his first blog post, “what had previously been a reason to participate, had now become the imperative to succeed.” Each member of the crew had their own personal reasons for joining, and family or friends affected by the disease.

What followed was many many months of training, sweaty gym sessions, stamina building exercises, early mornings, being out in all weathers and of course with learning how to row! One of the things that made a rowing challenge so appealling was that all the crew members started on a level footing. That level being absolute zero.

Not content with giving their lives over to the physical challenge of preparing for a 50km open-sea rowing experience, the crew realised they would have to put a lot of extra elbow-grease into reaching their fundraising target. And so began a calendar chocked full of events; a launch party at the Red Bull Headquarters in London, a 12-hour ergathon (ergometer = indoor rowing machine, and no, we didn’t know that either), races and obstacle courses and culminating with a gala dinner attended by our own Prof Iain Hutchison.

Though perhaps the most gruelling of the pre-challenge challenges was Shave-the-Waves. Throughout March and April, supporters could allocate their donation to one of the crew members. The more each crewman was allocated, the more hair he had to remove. As the only member to hit the full £1,000 Anurag Bhalla was depilated from head to toe, though he did get to keep his eyebrows.

All that was left was the row itself. Originally planned for June 13th, the challenge had to be pushed back a week while the weather insisted on being stubborn and uncooperative. The following Friday afternoon, after much crossing of fingers and checking of weather reports, the row was back on.

‼️‼️CROSSING UPDATE‼️‼️ Confirmation to meet at the harbour at 1am. We’re taking a chance in the weather!! Let’s do this!

To date the boys have raised a whopping £39,664 for their three chosen charities, of which Saving Faces is immensely proud to be one.

You can still sponsor the crew and their momentous acheivement.

We hope they had the good sense to take a few days off, are recovering well and celebrating with friends and family. To the Waves4Hope crew; Nick, Anurag, Kevin, Aidan, Tom F, Tom G and Chris, and all those who supported them in this tremendous challenge, we at Saving Faces salute you.