Unbeknown to our supporters, Mary was kind and generous who had been a friend of Professor Iain Hutchison and a long-term supporter of Saving Faces even from afar in Massachusetts and then Florida. 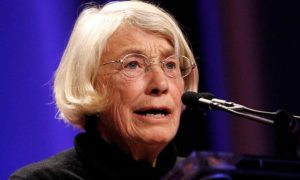 Mary Oliver was a highly beloved award-winning American poet whose work, with its unadorned language and odes to the natural world, captivated many admirers including celebrities globally. Since the age of 14, she has had a long and illustrious career as a phenomenal poet with more than 20 collections of poetry. This includes American Primitive (1983), which she won the Pulitzer Prize, House of Light (1990), which was awarded the Christopher Award and the L. L. Winship/PEN New England Award, and New and Selected Poems (1992), which won the National Book Award.

Mary sadly passed away early in 2019, aged 83, from lymphoma after being diagnosed with lung cancer in 2012.

She wrote “When Death Comes,” one of her best-known works, which she expresses her confidence in knowing she did not live a passive life and enjoyed every moment, not as a visitor, but as an active participant.

“When it’s over, I want to say all my life
I was a bridge married to amazement.
I was the bridegroom, taking the world into my arms.

When it’s over, I don’t want to wonder
if I have made of my life something particular, and real.

I don’t want to find myself sighing and frightened,
or full of argument.

I don’t want to end up simply having visited this world.”