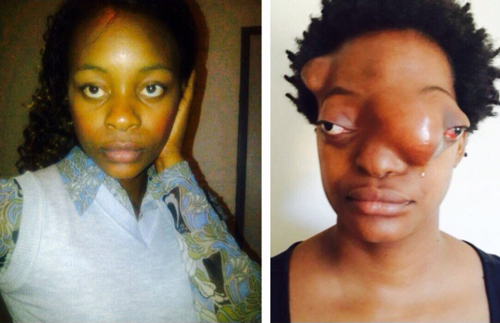 Tambu Makinzi is a 27 year old mum of one from Zimbabwe and lives in Cape Town South Africa. She has been diagnosed with a rare form of bone cancer called chondrosacoma. This cancer caused the cartilage in her face to grow out of control, which also caused her to lose sight in one eye. A new documentary about her struggle airs tonight (Monday 14th September 2015) at 10pm on Channel 5.

After a social media campaign raised enough funds to send Tambu to the United Kingdom, Professor Iain Hutchsion, Consultant Oral and Maxillofacial Surgeon, and Ian Sabin, Consultant Neurosurgeon, offered their time and experience free of charge. In March 2015, Tambu underwent a grueling 25 hour operation to remove the tumour. This was followed a few weeks later by another 14 hour operation.

Production company Captive Minds followed Tambu’s journey throughout her two life-saving operations to create a documentary that looks into ground-breaking 3D technology and the incredible bravery and recovery of one woman living with a disfigurement.

Her family are incredibly grateful for all the support and the huge generosity she has received so far.

If you missed the first showing, see the documentary now on Netflix.

It is with great sadness that we share the news that Tambu sadly passed away a year after the completion of the film in June 2016.