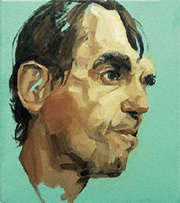 Henry de Lotbinière developed a malignant salivary gland tumour – adenoid cystic carcinoma – when he was 42 in 1987. Over the next 15 years Henry had more than 14 operations to keep the tumour at bay. Throughout this period he maintained a joie de vivre and infectious enthusiasm which enriched everyone he met. His energy was boundless and his insouciant attitude to obstacles seemed to render them invisible. His portrait by Mark Gilbert illustrated his innate power. Coincidentally, this portrait has become a rallying point for many people around the world with similar problems who have been encouraged by Henry’s obvious charm. In the last year of his life his barristers’ chambers organised an endurance weekend of marathon running, cycling, walking and canoeing which raised a significant sum towards the founding of the surgical research and trials centre which now bears his name. One of our first research projects looks at improving the treatment of adenoid cystic carcinoma.