We extend our warmest congratulations to Mr Martin Griffiths (Lead Consultant for Trauma Surgery) and the rest of the Violence Reduction Trauma Care team at The Royal London Hospital for taking home the award for Prevention and Lifestyle Team of the Year at The BMJ Awards on Wednesday 24th April 2019. 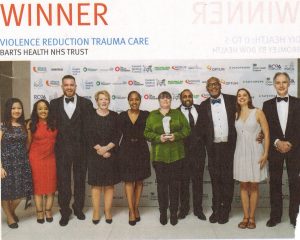 The BMJ Awards is a premier UK programme designed to recognise the inspirational work carried out by doctors and their clinical teams around the UK. The team were awarded for their ward based intervention, which was set up in conjunction with the St Giles SOS project aimed to reduce violence including knife crime and prevent future re-attendance with further injury.

“We were seeing a population of young angry people who had good clinical results, but around a third of them would be readmitted within five years for another injury. People don’t just need sewing up, they need supporting.” – Martin Griffiths commented.

Martin spoke about the service at the first conference of the Medicine and Me lecture series that The Royal Society of Medicine asked Saving Faces to organise in January 2018 for patients, carers and the general public. Read more about the conference here and the media coverage we received on the issue.