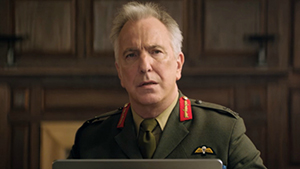 As many of you know, our patron, Alan Rickman sadly passed away early this year. It was a great loss to all who knew and admired him, both personally and through his films.

In partnership with the Phoenix Cinema in Finchley and featuring some very special guests, Saving Faces is laying out the red carpet for an exclusive charity preview of his last live action film, Eye in the Sky, on Tuesday the 12th of April at 7pm. Tickets are £15. 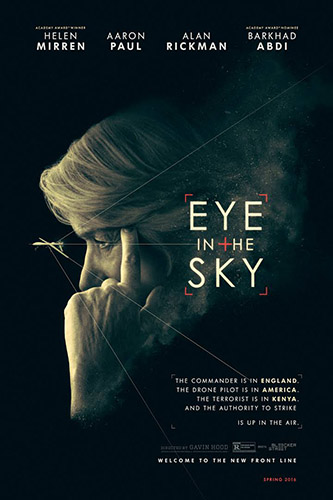 Eye in the Sky, is a tense military thriller starring Helen Mirren, Aaron Paul and Barkhad Abdi, and is the first movie to be produced by Colin Firth’s company, Raindog Films. London-based military intelligence officer Colonel Katherine Powell (Helen Mirren) is remotely commanding a top secret drone operation to capture a group of dangerous terrorists from their safe-house in Nairobi, Kenya. The mission suddenly escalates from a “capture” to a “kill” operation as Powell realizes that the terrorists are about to embark on a deadly suicide mission. From his base in Nevada, American drone pilot Steve Watts (Aaron Paul) is poised to destroy the safe-house when a nine year old girl enters the kill zone just outside the walls of the house. With unforeseen collateral damage now entering the equation, the impossible decision of when to strike gets passed up the “kill chain” of politicians and lawyers as the seconds tick down.

It premiered at the 2015 Toronto International Film Festival, and has continued to gather praise for its nail-biting suspense and unflinching look at the complexities of drone warfare. Eye in the Sky goes on general release in the UK on Friday 15th of April, so this is your chance to get in early and see the film that will have everyone talking.

The director, Gavin Hood will be in attendance to introduce the film and talk about his experiences on set with the actors. Due to time and budget restraints, many of the actors did not physically interact with each other, with sides of the same conversation being filmed at different times in different locations. He has spoken warmly of working with Alan and his dedication to what he felt was an important story.

“What he does, and did in the film, as we can all see, is enrich the story telling, with his presence and that beautiful voice and his humanity.”

An actor, writer and director, Gavin Hood made his name directing hard-hitting dramas such as Rendition (2007) and the oscar-winning Totsi (2005) as well as crowd-pleasing blockbusters like X-men Origins: Wolverine (2009).

There may also be a special appearance from some of the actors involved with the film. We’re working hard behind the scenes to make this happen.

Tickets are available from the Phoenix Cinema box-office.

All proceeds will go to Saving Faces and help fund the Alan Rickman Professorship of Oral and Maxillofacial Surgery at the National Facial, Oral and Oculoplastic Research Centre (NFORC).

We would like extend our special thanks to eOne Films and our hosts, the Phoenix Cinema, for making this event possible.

Click here for trailer, if it does not load above.